Disclaimer: This match has blood, so if you’re squeamish about that, don’t watch.

There were many reasons why this match shouldn’t have happened.  Bret’s opponent at Wrestlemania 13 was originally supposed to be Shawn Michaels, but The Heartbreak Kid took time off because of a knee injury in January (also, there were rumors that Shawn refused to let Bret win over him at Wrestlemania).  In the same vein, Steve Austin was not supposed to win King of the Ring in 1996, but a backstage politics and injuries changed that.  And Stone Cold was left with a crown at the end of the night and a microphone, where he created Austin 3:16.  However, both of these paths collided in the Rosemont Horizon outside of Chicago, Illinois, which is one of the best arenas that the WWE performs in (as you’ll see in a match later in the countdown).   These guys tore the house down, and in doing so, started the Attitude Era.  The finishing image of Bret Hart with the Sharpshooter locked onto Stone Cold with blood pouring out of his bald head onto his goatee screaming in agony is one of the iconic images of that era in professional wrestling.  It also cemented Austin as a main event player, and turned Bret into a heel (bad guy) for the rest of his WWE career until his return in 2011. 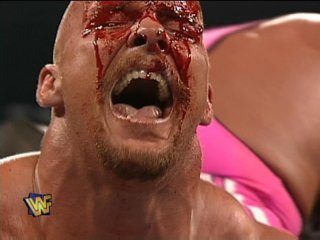 Favorite moment: While many fans pick the finish with the blood rolling down Austin’s teeth as their favorite moment, I like it when Austin first whacks Bret on the head with a chair.  Throughout the contest, Bret tries traditional “hardcore” wrestling techniques, such as fighting in the crowd, using the turnbuckle, etc.  Stone Cold changed the pace of the match by whacking Bret on the head with a steel chair, and by god, what an impact.  This is the moment that took the match from good to great.