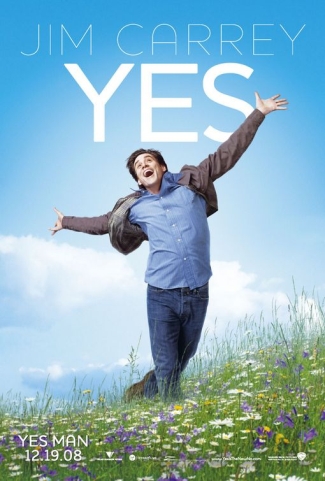 It’s easy to write Yes Man off as “Liar Liar 2″ as so many critics have. But Yes Man, a zany Jim Carrey movie about a man who can’t say no, has a more true and powerful center. Moreso than other high-concept Carrey comedies — Liar Liar, Me Myself and Irene, The Mask, Bruce Almighty — Yes Man contains a relevant, powerful truth at its core: Life is best experienced proactively.

That’s why I wanted to like Yes Man as I was watching it. Certainly, Yes Man is probably a notch or two above the disaster that most newspapers and magazines have it pegged as. But it misses out on greatness, and even goodness, because the film is so poorly executed.

The biggest flaw is that there’s not much to Carrey’s character. I felt no connection with him. I didn’t believe his despair at the beginning, didn’t feel his newfound passion in the middle, and didn’t taste any redemption in the end. Why are he and Bradley Cooper’s character best friends? I see no reason for that relationship other than every main character of a romantic comedy needs a best friend.

As he said yes to anything and everything, I felt like I was watching him read a script, not act. It’s partially his fault, partially the script’s fault. It’s frustrating because I believe this movie could have been so good if the film-makers had just let us feel Carrey’s journey a bit more. Even if Carrey had put a bit more thought into his words and a bit more hurt on his face, I might have been sucked in more.

Another big problem is that the movie doesn’t trust its viewer to think at all. It seems forced to point out everything. Right, we know Carrey would never have met Zooey Deschanel if he hadn’t started saying yes. You already made that pretty obvious, Yes Man, you don’t need to make that point the crux of the climactic speech.

A few of the jokes are really lame, too. The terribly uncomfortable dentures scene should never have been filmed, let alone made it past the editing room. There’s way too much of Rhys Derby’s boss/dorky friend character, who gets old fast.

Easily the best character in the movie is Zooey Deschanel’s. We know from an early encounter that she’s destined to be Carrey’s romantic foil, but she has vivacity in the face of predictability. The spontaneity and adventure-driven life this movie endorses is so much better embodied by her than Carrey, even after Carrey’s transformation.

All in all, I tolerated Yes Man. I didn’t love it, only barely liked it at places, and recognize that it’s far from a great movie. But at times, it’s a fun ride. The best portion is the frenzied second act when we get one set up and payoff after another. It’s the funniest and richest part of the movie. Plus, Carrey and Deschanel play off each other pretty well for the better portion of the movie even though Carrey’s character is underwritten. It’s an uplifting, simple, fun romantic comedy.