I was surprised to discover that I’ve never written about any musical group that would be classified as ‘shoegaze.’  That genre’s emphasis on heavenly washes of guitar sounds, gentle vocals, heavy feedback, and timeless melodies worked wonders for British bands such as Lush, Ride, Adorable, Catherine Wheel, and, of course, My Bloody Valentine.  But its pinnacle, in my view, is represented by the little-known Slowdive, whose last album came out over 20 years ago.  Through the course of just three albums, Slowdive created breathtakingly euphonious, sparkling landscapes that essentially announced that they were going to break your heart, and then went ahead and did so.

Shoegaze, particularly of the My Bloody Valentine ilk, often featured layers and layers of loud guitars piled high on top of each other.  Slowdive’s debut Just for a Day, however, is lighter and whispier, but still icy and depressing, a combination that produces mind-blowing results, beautiful and sad and pure.  Beach House owes their existence to this album, which essentially expands the best song Ride ever wrote (‘In a Different Place’) into an LP full of dream-like soundscapes.  Opener ‘Spanish Air’ sounds as though it’s echoing from the deepest cave in the world, and on ‘Celia’s Deam,’ lead singer Neil Halstead laments, ‘She told me that she loved me / Love just for a day / And all the time I feel her / I feel her fade away” as the rising synths, glittering sparkles, and lilting backing vocals elevate his cry to a place of truth.  Most shoegaze songs sound a lot prettier if you don’t dig into the dark lyrics, and Slowdive tracks are no exception.

The constant reliance on swirling guitar notes, airy synths, and despairing lyrics might reflect aimlessness if Slowdive didn’t pay as much attention to the songs as they do the sound, but, thankfully, they take care of that.  Nowhere is that more true than on ‘Waves,’ their all-time best work.  Over a hypnotic bed of music reminiscent of The Cure’s ‘Plainsong,’ Halstead delivers a lover’s final goodbye: ‘Don’t you know, I’ve left and gone away / You’re knocking on the door I close today.’  But he finds optimism in the moment; it’s as though everything becomes clearer, brighter, better in the absence of a doomed relationship, one whose pain you can let the waves, and that gorgeous melody, wash away.  A perfect song. 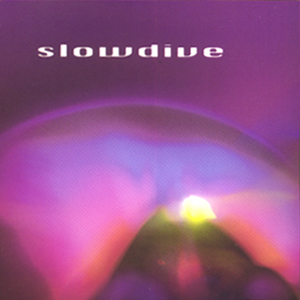 Souvlaki, seemingly the group’s best-loved album, delivers a slightly different sound.  The guitars here are less icy, but just as atmospheric, this time enveloping outstanding tracks like “Machine Gun” and “40 Days” in warmer textures.  If Just for a Day is you walking outside on a winter’s day, Souvlaki is you sitting inside, next to a fire, watching the snow fall.  And, once more, the band conveys its melancholy messages without succumbing to utter despair.

Shoegaze fans can hear the band’s imitators taking notes; Adorable’s Against Perfection and Lush’s Split draw heavily from this album. (The former’s tremendous ‘A to Fade In’ would have fit perfectly next to Souvlaki’s ‘When the Sun Hits.’) It starts off with the otherworldly ‘Alison,’ a romantic vision on which Halstead winks to his muse, “Your messed-up life still thrills me” as those guitars craft textures beautiful, ominous, propulsive, and weightless all at once.  And ‘Altogether’ is the band’s most haunting track–one that comforts you and tears you apart at the same time.  There are none of Just for a Day’s piercing guitars here; instead, the devastating cloud of darkness blankets everything, including Halstead’s deepened vocals, and gradually seeps into your mind.  By the time he whispers, “It broke my heart, but then I guess you didn’t know,” the spell is complete.

Souvlaki loses the narrowest of points in my book for the couple of pretty but fillerish songs that aren’t fully developed (e.g., ‘Sing’)—a problem that gained prominence on Slowdive’s final album, Pygmalion.  The band’s imminent collapse meant that Halstead worked on this album almost entirely by himself, and, in doing so, he redefined the word ‘sparse.’  Most ‘songs’ are such only in the loosest sense of the word, devoid of melody and thematic purpose, mere resting places for vague ambient touches and isolated guitar notes.

It’s an odd listen (First words in the liner notes: “The press hated it”), and one that can easily become boring.  The joy of Slowdive, for me—and really, of all good shoegaze—came through songs that overflowed with feeling, with catharis, with intensity.  The pleasures lie in the kaledoscopic glaze of “The Sadman,” or the heartfelt melancholy of “Country Rain.”  Pygmalion scales things back too far, with the rejection of melody in particular stripping away a key strength.  Likewise, the inaccessibility continues with the song lengths; previously, the band knew to limit themselves to four or five minutes, allowing the swirling textures to wash over you without drifting too far into aimlessness.  But here, five songs exceed six minutes, and only one deserves it.

That said, I know my tepid feelings towards Pygmalion partially reflect my preference for dense music over sparse, and it can’t be denied that the album is perfect in certain moments.  Halstead can’t write an album without at least one knockout, and this time, it’s “Blue Skied An’ Clear,” which—whaddya know—is its most fully developed.  This one actually builds and pulls back, actually provides verses and a chorus and the barest hint of a guitar melody.  It’s seven minutes of beautiful, reflective shoegaze, the ideal song to go to sleep on.

Slowdive was clearly finished by the time of Pygmalion, but fans should explore Mojave 3, the group Halstead subsequently formed with fellow Slowdive members Rachel Goswell and Ian McCutcheon.  Mojave’s debut, Ask Me Tomorrow, raises the ceiling of ‘dream pop,’ matching up with anything Mazzy Star or Red House Painters ever did.  A less noisy version of Slowdive, Mojave 3 relies heavily on the exquisite vocals of Goswell; later releases sound too bland for me, but everything was still clicking on Tomorrow.